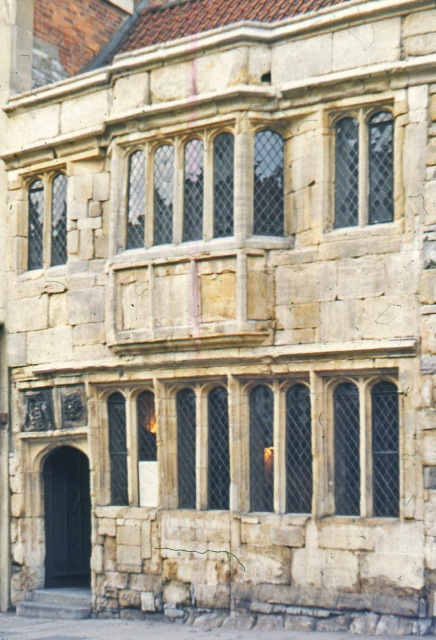 It is once more be possible to view the fascinating story of the Glastonbury Lake Village at Glastonbury Museum at the Tribunal, the 15th century merchant’s house on Glastonbury High Street (left).

Visitors are welcome to view the Lake Village collection, as individuals or in educational groups. The whole history and background to the Glastonbury Lake Village has been brought to life through displays of the most important finds and artists’ reconstructions. Also on display are the well preserved remains of an Iron Age dug-out canoe. The Lake Village collection presents an insight into everyday life in an Iron Age settlement, dating from around 2000 years ago, when much of Somerset’s landscape was covered by wetlands. Although these marshes have long since been drained, the preservative properties of the peaty soils in the Glastonbury area left an archaeological legacy of international importance.

Arthur Bulleid was a local medical student, son of the founder of the Glastonbury Antiquarian Society and an amateur archaeologist. Prompted by the results of work on lake villages in Switzerland, in 1888 he began to search for similar sites in the Somerset Levels and in 1892 he discovered a number of earth mounds near the road from Glastonbury to Godney, just north of Glastonbury. 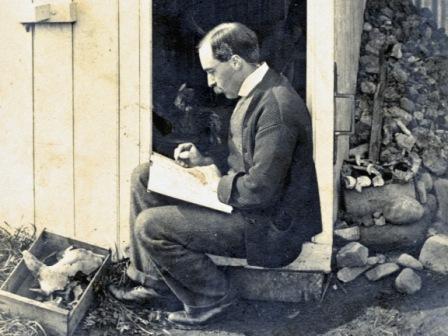 From then until 1907, Bulleid and a small team of helpers methodically excavated the site and unearthed a fantastic collection of artifacts, including many items of pottery, wood, iron and bronze in a fine state of preservation.

Evidence of habitation was also found in the floors and hearths of dwellings and a defensive wooden palisade. Felled trees, reeds, bracken and clay brought from elsewhere had been used to create a man-made island of around 3½ acres in size, to which the settlers would have gained access by dug-out canoes and trackways of wood laid across the marshland.

Arthur Bulleid’s finds have allowed a clear picture to be formed of life in the Glastonbury area during the Iron-Age times. From small beginnings, in about 150 BC., the settlement grew to a maximum of 18 houses and about 200 people. The occupants were forced to leave in about 50 AD., due to rising water levels caused by a deterioration in the climate. 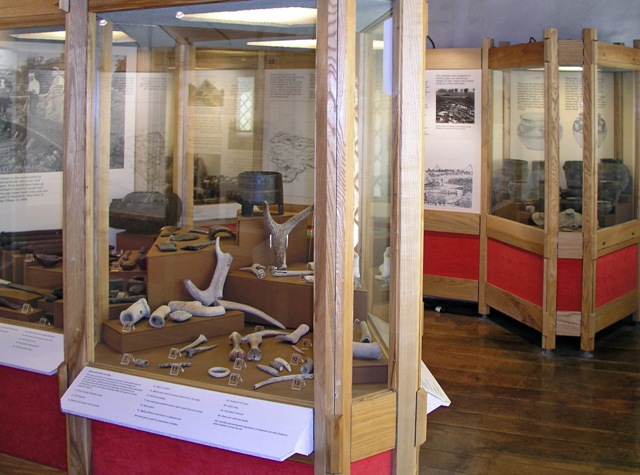 The Avalon Marshes Centre hosts the Bulleid and Gray hut, which formed the base for the archaeological excavations at the Glastonbury and Meare Lake Villages. The hut was part of the Peat Moors Centre, which closed in 2009, but is has been relocated next to two new replica buildings, one Roman the other Saxon.

Details of the internationally important iron age site and its artifacts and related research.

Glastonbury Lake Village was built on an artificial island, in shallow water on the Somerset Levels. It was discovered, by Arthur Bullied, in 1892. Excavations began in that year, and were completed in 1907. Since then, interpretations of the layers of archaeology that were uncovered have varied. It seems possible, however, that development of the village started around 250BC. It peaked about 100BC (a, roughly, triangular site of approximately 1.4 hectares, housing perhaps fourteen or fifteen extended families, some 200 people), but rising water levels caused its abandonment perhaps as late as 50AD.

As a result of the waterlogged conditions, structural woodwork and wooden objects were very well preserved. The island's foundations were made of brushwood and logs, filled in with rushes, bracken, peat and clay – the whole being retained by a perimeter palisade. On top, individual, circular clay floors were laid as bases for roundhouses. The wall of a house was made by driving a circle of posts, through the floor, into the foundations. The spaces between these uprights were then filled with wattle and daub, and a thatched roof was erected. “Dwellings were occasionally burnt down ... It was in the locality of the burnt huts that information was forthcoming regarding the construction of the walls and roofs. The floors were thickly covered with baked clay rubble, charcoal, and pieces of charred reed. The pieces of baked clay were frequently marked with the impressions of wattle work on one side, and with finger-prints on the other. The fragments of charred reed were presumably burnt thatch. The roofs of the dwellings were supported by a central post, the base of which was usually found near the margin of the hearth embedded in the clay floor. Some of the larger dwellings appear to have had two or even more central posts. Other details of the construction are left largely to our imagination... From the complete hurdles that were discovered we conclude the walls were about six feet high, and some dwellings had partitions. Remains of flooring boards and joists were found in a few huts.” Arthur Bullied ‘The Lake-Villages of Somerset’ (Fifth Edition, 1958)

As, over time, the foundations beneath a house compacted, so the floor would have to be built up again. In one instance a sequence of ten floors was found. “In dwelling-mounds with several floors, the superimposed layers of clay generally increased in diameter from below upwards. A new floor was usually accompanied by the re-erection of the dwelling, the diameter of the hut being increased.” The roundhouses were between 5½ metres and 8½ metres in diameter. The entrances were not on any particular alignment. It seems that some houses must have had solid wooden doors (though none remained), since an iron ‘latch-lifter’ and a stone with a pivot-hole were among the finds. In fact, a vast array of everyday objects were found in and around the village – items of bronze, tin, lead and iron; amber, glass, jet and shale; wood, bone and antler; pottery, baked-clay, flint and stone.

Bronze-working and iron-working were carried out on the site. Of the 274 bronze items found, most were “objects of personal adornment”, though the prize find was a bowl. Of the 18 tin objects, the most intriguing was a: “... round and solid bar of pure tin; it was capped at each end by a bronze terminal, and measured 10¼ inches in length, and one inch in diameter.” Analysis of the bar's surface suggested it had originally been gilded. There were 32 lead items, of which 13 were fishing-net sinkers.

Of the 111 iron items, only 7 could be classed as weapons – “Daggers (including fragments) 3, spearheads 3, fragment of sword 1” – although: “That the inhabitants had iron weapons is certain, for numerous pieces of bronze bordering, and the terminals of three sheaths were discovered.” There were parts of 4 snaffle-bits; and 4 saws – the teeth were set so that the cutting action was on the backward rather than, as in a modern handsaw, the forward stroke. Some of the iron tools still had their wooden handles.

Two ‘currency bars’ were found, but just a single coin – an incomplete ‘potin’, dating from around 100–50BC. “Five objects of amber and twenty-seven of glass were found, and with the exception of three glass specimens, all the objects were beads. A lump of greenish-blue glass slag is of much interest and importance, as it strongly supports the supposition that glass was made at the Village.

Only one object was found made of jet, a highly polished ring or bead ...” The lathe was another innovation of the Iron Age, and objects of turned-wood and turned-shale were found at the Village. There were 31 shale objects: “... these include two very fine lathe-turned and ornamented armlets. From the fact that a waste core was found, and several rings and other specimens in the process of making, we are led to believe that the shale was imported and worked at the village.”

Amongst the “large collection” of wooden items were: “Portions of fourteen tubs and cups, either cut from the solid or stave-made. In some the staves were dowelled together, in others fitted together like a modern barrel and hooped. Sixty-three pieces of frame-work, parts of looms or apparatus for making textile fabrics. Five ladles, parts of three lathe-turned wheel-hubs, several wheel-spokes, a ladder with four steps, a small door ... [handles from various tools] ... fragments of baskets, two small wood pins found in association with a bronze mirror, tweezers and some dark colouring-matter, a draughtsman, the tops of two spade-handles, three pieces of finely ornamented wood bands, two wooden mallets, three stoppers, an oak dish or trough, beams and planks with mortise holes, and several wicker-made hurdles.” A dugout canoe, of oak, was discovered by a labourer clearing the ditch of a nearby field. There were hundreds of bone and antler objects, including 89 weaving combs (counting fragments, and 5 which were not finished) and 5 dice. Three of the dice were found in association with 23 disc-shaped polished pebbles, which were presumably counters.

“Although several tons weight of pot-sherds were unearthed only some half-a-dozen vessels were found intact... With reference to the production of the pottery, the clay and the other materials composing the various pastes were probably all products of the immediate neighbourhood, and there are reasons for thinking that the whole of the Glastonbury pottery was made at or near the village... With regard to the mechanism employed in making pottery, very few pots show any evidence of being wheel-made; the large bulk of the pottery was built up by hand.”

Among the “very numerous” objects made of baked-clay were loom weights and spindle whorls, pieces of two tuyères (used to conduct the blast of air from bellows into the furnace), and hundreds of sling pellets. Most of the (in excess of 230) spindle whorls found at the Village were of stone. There were 18 saddle querns and 38 rotary querns. There were also a few flint artifacts: “There is no actual proof that the fabrication of flint implements took place at the Village, but as the collection includes 362 flakes and chips, some of the latter being very small, we are led to believe that a flint industry was carried on, if for no other purpose than for the making of scrapers.” There was also a flint arrowhead and a saw. A Neolithic polished axe-head and part of a second were also found. They would not have been brought to the Village for practical use, but as curios or objects of reverence.